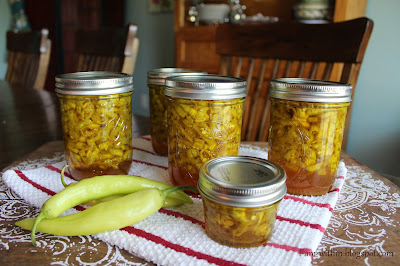 It's been a terribly busy, but fun, canning season here in the Meadow of Simple Blessings!

I wanted to give you this quick little recipe in case you find yourself blessed with an abundance of hot peppers this year.

Traditionally, Cowboy Candy is made with jalapeno peppers, but it takes a lot of them. I was blessed with so many banana peppers from my friends Mari and Barbara Ann, that I knew immediately, I wanted to try to make the cowboy candy for my husband using some of the banana peppers. I also made a lot of regular Hot Pickled Peppers, too. I'll share that in the next post. This same recipe can be found in many Pinterest posts, so please do not think this recipe is mine. Mari, the same friend who gave me the peppers, actually gave me the recipe. When I had a question about the recipe and couldn't reach her, I tried to see if I could find the answer online. That is how I discovered the popularity of the same recipe! In case you haven't seen it before, I present it to you today!

Wearing gloves, remove stems. Slice peppers into uniform 1/8-1/4 inch rounds. Set aside. In a large pot, bring vinegar, white sugar, turmeric, celery seeds, garlic and cayenne pepper to a boil. Reduce heat and simmer for five minutes. Add pepper slices and simmer exactly four minutes. Use a slotted spoon to transfer the peppers, loading into clean, sterile canning jars leaving 1/4 inch headspace. Turn up the heat under the pot with the syrup, and bring it to a full rolling boil. Boil hard for six minutes. Use a ladle to pour boiling syrup into jars over slices. Remove air bubbles. Seal. Process 10 minutes for half pints or 15 minutes for pints.

Wearing gloves, remove stems and slice peppers into rounds. Set them aside. 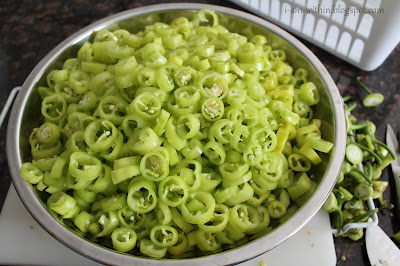 Just as as side note, I like to have everything as organized as I possibly can to help things run along quickly and smoothly. While I sliced peppers, I started heating the jars. I let them boil for a few minutes and leave them on low heat as I work so they stay hot until I need them.

In a large pot, combine sugar, vinegar, turmeric, celery seeds, garlic, and cayenne. Bring it to a boil. Reduce heat and simmer for five minutes. 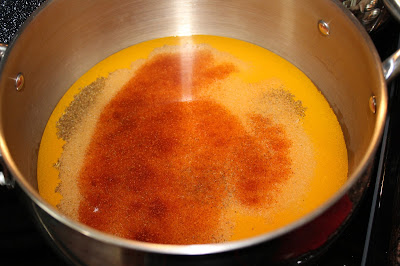 While waiting for this to come to a boil, I cleaned up from cutting peppers and organized my work station so that I could fill jars as quickly and seamlessly as possible. I had the potholder to have a place to sit the hot pan when it was ready. I also had a jellyroll pan lined with a towel on which to place my hot jars when I was ready.

Please pardon the bell peppers and dehydrator. I was also working on dehydrating those at the same time.

Add pepper slices, and simmer exactly four minutes. Use the latter end of this time to move jars to your work station. 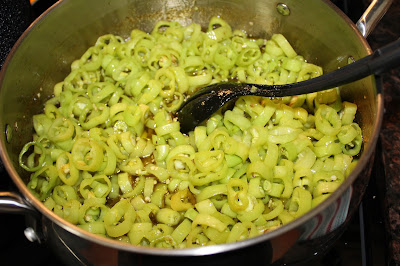 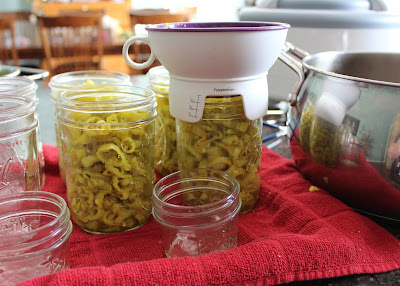 Place the pan of syrup back on the stove. Turn up the heat under the pan with the syrup and bring to a full, rolling boil. Boil hard for six minutes. 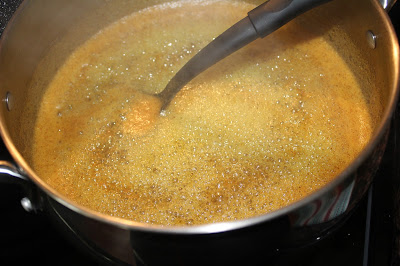 Use a ladle to pour boiling syrup into jars over slices. 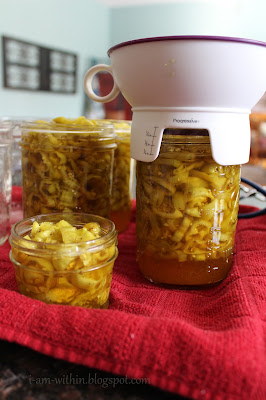 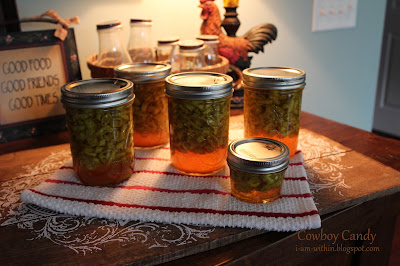 Homeschool At It's Best! 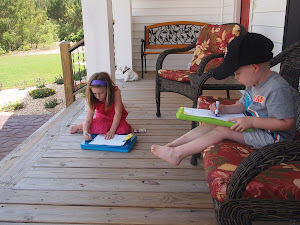 This is how we work on a beautiful day!